Project 366 - Starting with the ABC’s

Blogger's Note: To mark the fifth anniversary of ITYWLTMT, we begin a long-term project that will introduce - and re-introduce - musical selections in the context of a larger thematic arc I am calling "A Journey of Musical Discovery". Read more here.


On April 1st 2011, I began a personal journey into the Blogosphere, sharing my thoughts on and passion for Classical Music. This endeavor gave rise to I Think You Will Love This Music Too, my personal platform and The Tuesday Blog, a platform I have been sharing on the Classical Music Forum TalkClassical.

Part of this initiative has had me gather music to illustrate some of my musings, and to date we have well over 200 music montages and dozens of playlists containing individual MP3 files, all of them posted on the Internet Archive for music lovers to stream and download.

Today, we launch into a new long-term project that will explore the Classical Music repertoire in a way I hope you will find informative and enjoyable. It is fitting that we start this project with our first two montages, dusted-up and posted on our Pod-O-Matic channel for your listening pleasure.

If you care to join me, let's begin our journey of musical discovery.


To begin our music exploration, I wanted to propose a way to cut a swath through the Classical (and not-so-classical) repertoire in order to sample as much of it as we can, and do so in a fairly condensed amount of time. Think of it as thumbing through travel brochures at the Travel Agent, and figuring out what kind of places you’d like to visit.

I have selected 26 works that last about 5 minutes each. The time investment is going to be about two and a half hours, but at the end, you will have sampled almost every genre and almost every musical era. From that point, we can steer you to the right category of like works which we’ve organized into anthological posts we will feature on a regular basis.
.
At least, that’s the plan.

Before we talk about our two playlists, I think we need to take some time to look at the “basics”, and I mean here primarily two specific contexts we should consider when it comes to Classical Music.

One way of classifying works of music is to consider the time period when they were composed, as many of the trends and fashions we associate with the Western Classical Music “code” evolve through the years, and composers of a specific period compose using those trends and fashions.

The historic periods we typically associate with all art forms (literary, visual arts and music) share these common period names. All we are doing here is provide a rough “time box” and some reference information you might find useful.

The following chart proposes very broad definitions of the eras and the composers associated with them. Many composers are transitional, meaning that they were trained and produced music in one era but were instrumental in moving those traditions into the next. Examples of transitional composers include Beethoven and Mahler, only to name those. 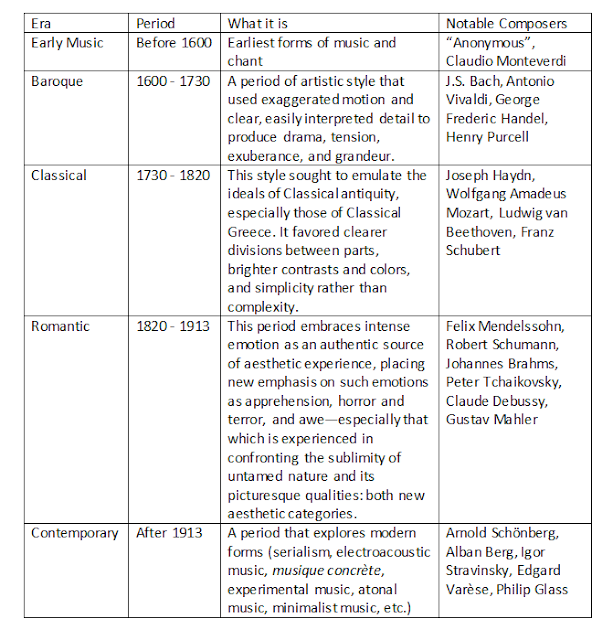 Sometimes, it is even appropriate to further subdivide eras, as trends morphed significantly during the period to create a bona fide movement. For example, it is not uncommon to divide the Romantic era into the Early and Late Romantic, and to consider impressionism or nationalism as specific trends. Further, musical traditions – German, Italian, French, British, Russian and Eastern – also have their own twists and wrinkles throughout these eras,

Another way of organizing music is to look at how they are used and performed. Again, here is another chart that provides some markers you may find useful. 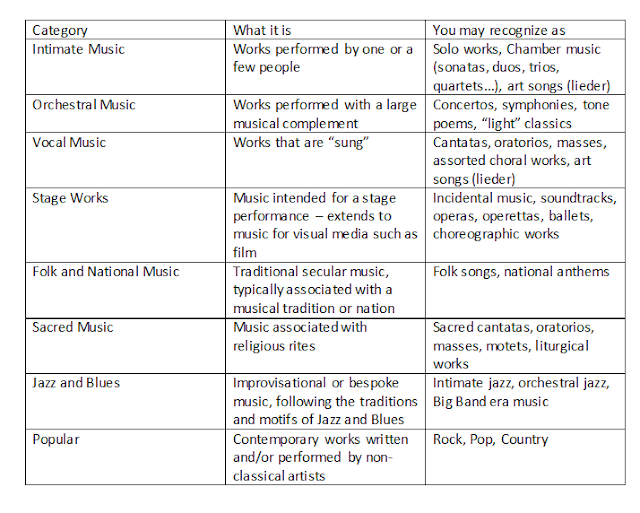 Of course, a work may “fit” into more than one category (for example, ballet music qualifies as a stage work and can also be orchestral) and some categories may naturally subdivide into more specialized groups. This chart is highly subjective, but is really intended to provide you with some context in order to find “like” works.

I have listed here the works “in order of appearance”, with their titles and composers. A later chart assigns them to the periods and categories we just discussed. Most of the works proposed fall either in the Romantic or Contemporary periods (you will notice that, though I was a bit sneaky in my presentation, there aren’t any works from the Classical period – something I will remedy with our first follow-on installment later this month). I don’t think this was done on purpose, though it may tip my hand a bit when it comes to my personal tastes.

As for the genre, most of the works (almost 2-to-1) are orchestral in nature vs intimate, and many of them are either vocal or stage works.

Some insight on the Music

Our “A” selection is commonly known as “Albinoni’s Adagio” as it was long-attributed to the Italian Baroque master Tomaso Albinoni. It was actually composed by the 20th-century musicologist and Albinoni biographer Remo Giazotto, purportedly based on the discovery of a manuscript fragment by Albinoni. It isn’t uncommon for composers of a later era to compose in an older style. For instance, modern composers like Igor Stravinsky, Béla Bartók and even Heitor Villa-Lobos are known to have written works in the baroque style – you might call it neo-baroque.

Letters “B” and “P” come from the Jazz repertoire. Dave Brubeck was a mostly self-taught, “play it by ear” jazz pianist who, later in life, decided to study music “seriously”, even taking lessons from the French composer Darius Milhaud (who spent some time in California after WWII). Brubeck’s “Blue Rondo” is half-jazz, half-tribute to Mozart, though his use of very peculiar rhythms would have perplexed Amadeus. Juan Tizol was a Puerto Rican trombonist and composer who also happens to have been a member of Duke Ellington's band. He’s credited with many jazz standards performed by Ellington (like Billy Strayhorn) - "Caravan", "Pyramid" and my choice, "Perdido".

Ballet music makes the list under “C” and “F”. Léo Delibes is one of the more prolific French composers of the mid- to late Romantic – along with Charles Gounod and Jules Massenet). Among the works he’s most remembered for is the famous “Flower Duet” from the opera Lakmé, and his two ballets Sylvia and Coppélia. “C” is an excerpt from the latter. Leonard Bernstein is a triple (if not a quadruple) threat - conductor, music educator, and also a great composer, both for the concert hall and the stage. His 1944 ballet Fancy Free (which is – I believe – the inspiration for the movie musical “On the Town” which he also composed the music for) has an interesting “dance competition” sequence which is sometimes performed as “Three Dance Episodes”.

Because we brought up Massenet just now, he’s implicated under “M” and “O”. Massenet is mostly remembered for his many operas (including Manon), and the two tracks I chose are excerpts from two of his other operas. Le Cid (after Corneille’s depiction of the Spanish hero) has a beautiful tenor aria that is the perfect “O” for this musical alphabet. The second track is a “transcription” by Japanese composer Akio Yashiro of the haunting “Méditation” from the opera Thaïs, usually set for solo violin but played here by the legendary Jean-Pierre Rampal at the flute.

Speaking of opera overtures, we have “D” and “G: Emil von Reznicek’s Donna Diana and Adolphe Adam’s Giralda. As for opera arias, the stirring “Vissi d’arte” from Giacomo Puccini’s Tosca (“V”), and “I Wants to Stay Here (a.k.a. I Loves You, Porgy)” from George Gershwin’s opera Porgy and Bess (in a jazz adaptation featuring Ella Fitzgerald, “I”).

On the solo instrument front, we have one of Johann Sebastian Bach’s Schuller Chorals for organ  (Sleeper’s Awake, or in German Wachet auf! ruft uns die Stimme, thus “W”), one of the many Etudes-Tableaux for piano by Sergey Rachmaninov (“E”), and an organ adaptation of the Largo from George Frederic Handel’s Xerxes (often played at weddings…, “X”). Our lone chamber work is Fritz Kreisler’s violin showpiece, “Love’s Sorrow” (Liebesleid, “L”).

Next, we have a pair of Canadian compositions. Pierre Mercure’s Kaleidoscope (“K”) is one of the mainstays of the Canadian orchestral repertoire, an avant-garde piece that has a very brisk and catchy tune. Equally catchy is Hésitation, a short orchestral bonbon by French-Canadian violinist and arranger Maurice Durieux (“H”). If you like bonbons, then you will certainly like Leroy Anderson’s delightful use of a now obsolete office appliance, The Typewriter (“T”).

Closing off the “pure” orchestral selections on our list, we have Gustav Holst’s “Jupiter” (“J”) from his famous suite The Planets, and the short Scandinavian tone poem Saga Dream by Denmark’s Carl Nielsen (“S”).

And finally, some songs of different kinds: Gustav Mahler’s ethereal “Primal Light” (in German, Urlicht, “U”), is featured both in his Second symphony and as part of his song cycle Des Knaben Wunderhorn, a collection of at times naïve and child-like songs about youth and its wonders. Hector Berlioz hits the right exotic-romantic mix in his Zaïde, and finally Lennon-McCratney’s classic Yesterday (“Z” and “Y” respectively).

Listener Guide #1 - "Musical Alphabet" (Part I, A-M): As an ice-breaker, I thought I would start off by offering you a taste of my collection under the theme of a "musical alphabet". This first podcast is brought to you by the letters A through M. English commentary (ITYWLTMT Podcast #1- April 1, 2011).

I think you will love this music too!
Posted by Pierre Cherrier at 3:00 AM