This week’s Tuesday post is another in our ongoing series Once Upon the Internet with three works taken from the Italian public domain music site LiberMusica. The common thread shared by the three works featured this week is French ballet music, emanating from two different eras.

André Ernest Modeste Grétry was a Belgian composer from the Prince-Bishopric of Liège, who worked from 1767 onwards in France and took French nationality. Staged during the French Revolution, his one-act opera La rosière républicaine lampoons of the well-established practice of entrusting religious authorities with the organization of "public holidays." We see a church transformed into a republican feast, replacing the “dismal emblems” by “the attributes of virtue and reason”, and the clergy become good republicans. The final ballet – featured here - (whose background is "too light to be seriously judged") was greatly appreciated.

The final two ballet suites are taken from two large classical ballets by Léo Delibes. Dr. Coppélius has made a life-size dancing doll. Coppélia is so lifelike that Franz, a village youth, becomes infatuated with it and sets aside his heart's true desire, Swanhilda. She shows him his folly by dressing as the doll, pretending to make it come to life and ultimately saving him from an untimely end at the hands of the inventor.

The original post featured some keyboard works by Claude Debussy, including his second book of preludes. As I stated in the original post, these were composed about two years after the first book, between the last months of 1912 and early April 1913. The works in Debussy's second book of préludes are similar in intent to those of Book I (1907 - 1910). Several of them look ahead to Debussy's later style, in which the composer's earlier impressionistic, almost Romantic poetry was supplanted by a greater concentration upon technique and neoclassical objectivity.

In order to “stretch” the original share, I added Debussy’s cello sonata to open the A la Carte montage. Initially subtitled "Pierrot is angry at the moon," the Sonata for Cello and Piano does have in it some of the modern-day commedia dell'arte sensibility - a raw, heart-on-the-sleeve, dark humor. The Cello Sonata is the most unrefined, emotionally exposed of Debussy’s three sonatas - maybe even of all Debussy's works.

Canadian pianist Francine Kay received her early musical training at L’Ecole de Musique Vincent D’Indy in Montreal, where she studied with Sr. Rita de la Croix and Yvonne Hubert. A scholarship from the government of France took her to Paris to study with Yvonne Lefebure as part of “Juillet Musical”, held in Saint-Germain-en-Laye, the birthplace of Debussy. She obtained her Bachelor and Master of Music degrees on scholarship at the Juilliard School, where she studied with Adele Marcus. Ms. Kay then pursued her studies with Marek Jablonski and Leon Fleisher.

The original post, featuring cello music by Beethoven and Bach, is being “mashed up” into a pair of new playlists, the first of which features Bach’s suites for solo cello.

This new musical share, in tandem with another playlist from the Once Upon the Internet series completes the set of six suites.

The second suite was taken from the complete set recorded by Mr. Markevitch, found on YouTube at the following URLs:

Posted by Pierre Cherrier at 7:00 AM No comments:

Email ThisBlogThis!Share to TwitterShare to FacebookShare to Pinterest
Labels: A la carte

Blogger’s Note: As we review our many musical shares from our musical forum activities under our ongoing “222 Day Binge Challenge”, the Friday Blog and Podcast will revisit some themes from past Tuesday Blogs. Today’s montage is part of that exercise. The Tuesday post in question was issued on August 22, 2011. The programme is identical and the below commentary is taken almost verbatim from the original post.

Mathis der Maler (Matthias the Painter) is an opera by Paul Hindemith which focuses on the life of Matthias Grünewald, an actual historical figure who flourished during the Protestant Reformation, and whose art was an inspiration to many creative figures living in the early 20th century. Hindemith composed his Mathis der Maler symphony in 1934, before he had completed work on the opera. 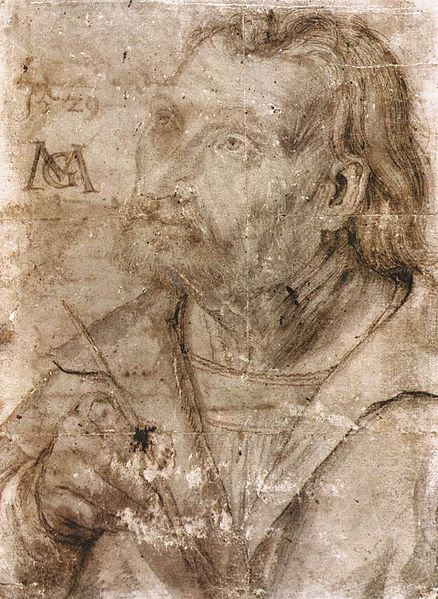 (Matthias Grünewald - Half length portrait of a man with a pinfeather looking up, 1529)

Aldo Rafael Forte was a long-time member of the United States Air Force, the last 16 years spent as Composer/Arranger with the Air Combat Command Heritage of America Band based out of Langley Air Force Base, Virginia, renamed USAF Heritage of America Band about 10 years ago. Forte wrote a number of challenging wind band works for his charges, one of his most ambitious being Impressionist Prints, inspired by six Impressionist and Post-Impressionist painters. The work consists of six contrasting sections depicting the work of the six painters. Impressionist Prints is dedicated to Major Larry H. Lang and the USAF Heritage of America Band. The group premiered and recorded the composition in October 2000, and was awarded First Place in the 2001 National Federation of Music Clubs American Music in the United States Armed Forces Composition Competition.

Here are a couple of the paintings depicted in Forte's work: 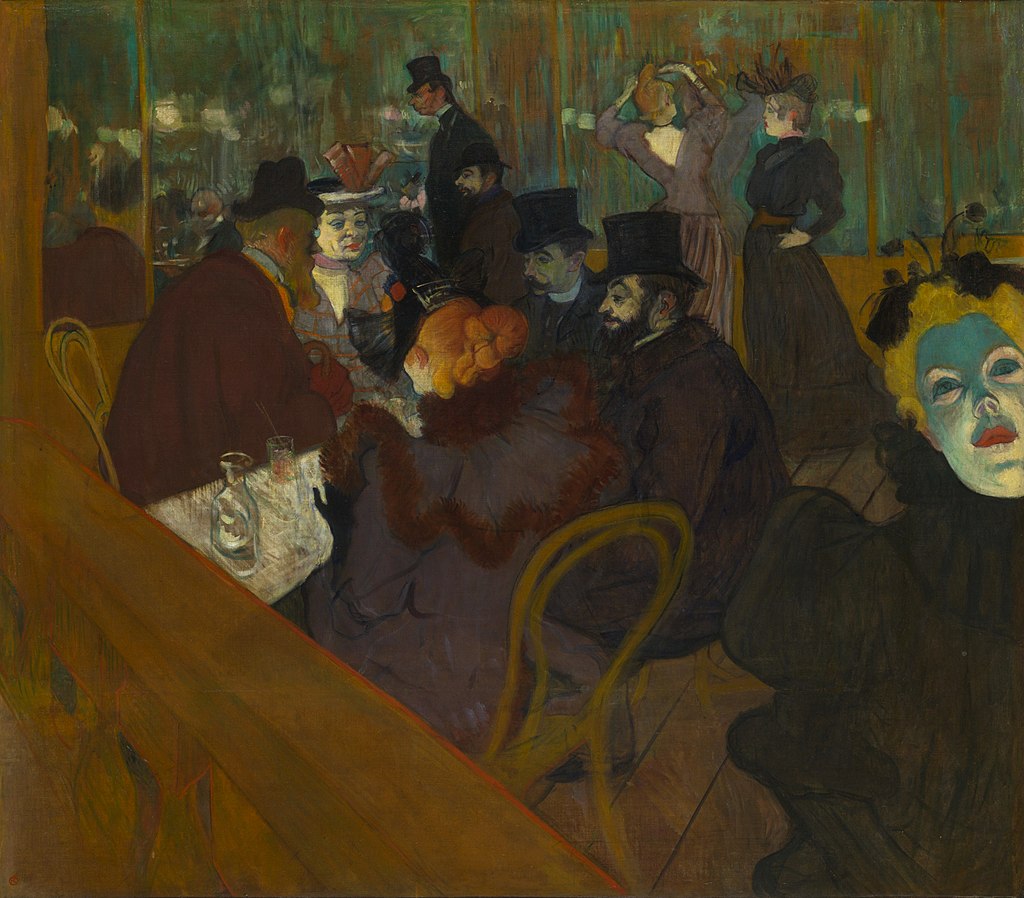 Isle of the Dead (German: Die Toteninsel) is the best known painting of Swiss Symbolist Arnold Böcklin . Prints of the work were very popular in central Europe in the early 20th century - Freud, Lenin, and Clemenceau all had prints of it in their offices. 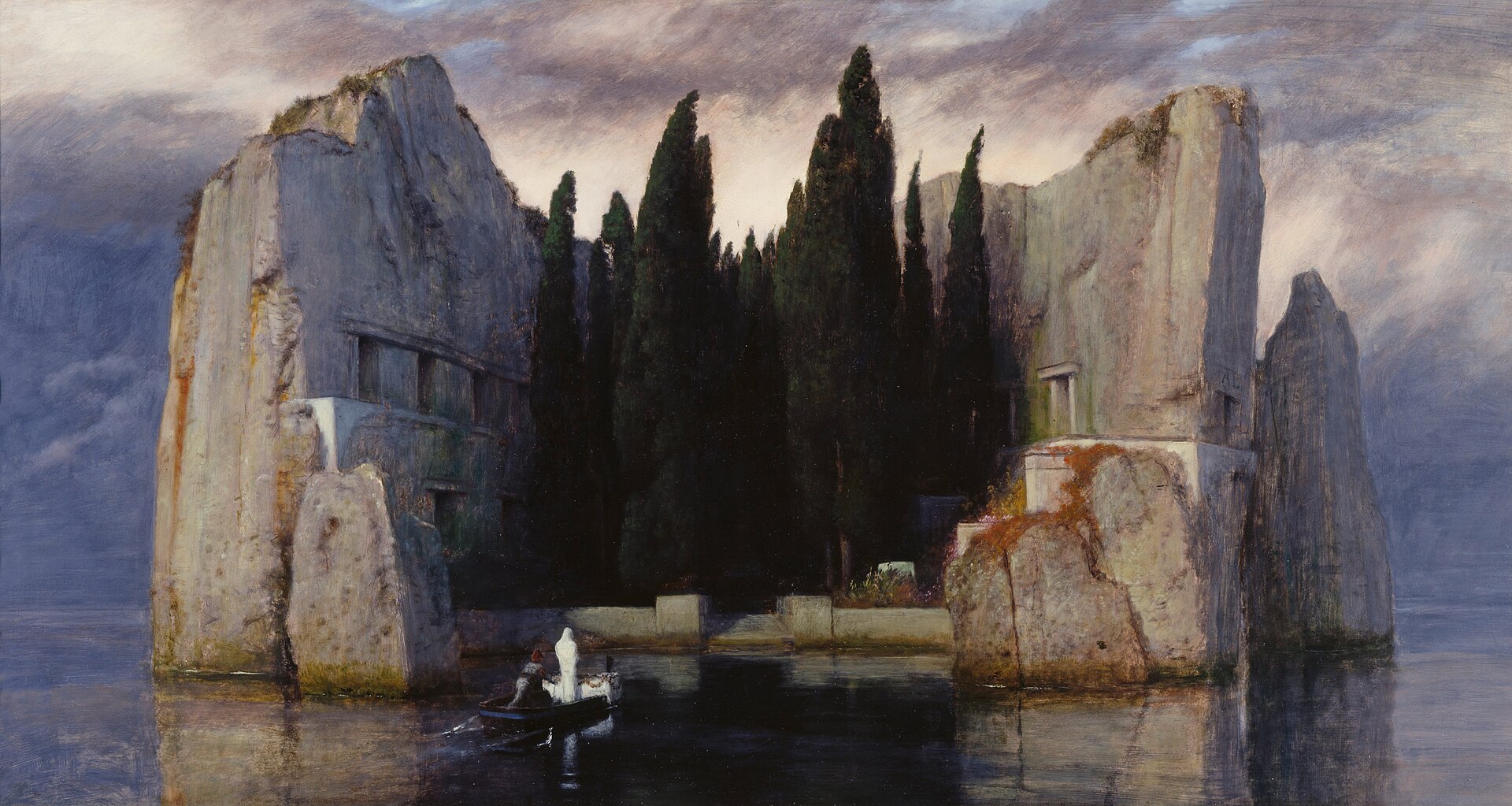 Rachmaninov wrote a tone poem inspired by the painting, and it closes the montage.

The Complete Gershwin (Siegel/Slatkin/St-Louis SO)

Our Vinyl’s Revenge for October is this VOX BOX collection issued in 1974 featuring all the major concert works for orchestra and piano and orchestra by George Gershwin.

The title of the 3-LP box set is a bit of an oversell, as these are not “all” the works for orchestra and piano and orchestra attributed to Mr. Gershwin. Absent in this set are his musical comedy overtures, orchestral settings from the Gershwin songbook and a version of Rialto Ripples for piano and orchestra. All of these were featured in other recordings which may be featured in future discussions.

Two works in this set are more rarely recorded. The Lullaby is a student work originally set for string quartet, and whose main theme gets reused in his 1922 one-act opera Blue Monday. I’ve heard this work in concert in 1987-88 and it was part of Erich Kunzel’s “Gershwin Centennial” anthology. The same goes for Catfish Row, the only “official” suite assembled and published by Gershwin himself from Porgy and Bess. The more recorded suite is the “Symphonic picture” which was arranged by his long-time orchestrator, Robert Russell Bennett.

At the time of this recording, Leonard Slatkin was Walter Susskind’s assistant in Saint-Louis. He would return to the orchestra a few years later as music director (1979–1996). Slatkin in a recent interview explained Susskind asked him to take on the project as he was better suited for American repertoire.

Born into a musical family, Internationally acclaimed pianist Jeffrey Siegel studied with Rudolf Ganz in his native Chicago, with the legendary Rosina Lhévinne at The Juilliard School and, as a Fulbright Scholar, with Ilona Kabos in London. Siegel has been soloist with the world’s great orchestras. A passionate communicator as well as a performer, he hosts Keyboard Conversations, a travelling concert-with-commentary, in major American cities.

For those who follow our podcasting channel, this musical share will be deployed in two parts: today (Sides A, B and D) and next Tuesday (Octiber 12, sides C, E and F).