As I usually do this time of year, I issue a quick update on what we did last year and what we plan on doing next year on all our platforms.

2021 - or Year 2 of the Corona Virus Pandemic - has ha its ups and downs, though we have tried here to continue with our daily programming on For Your Listening Pleasure, with new releases nearly every week. We completed our complete recap of our montages in 2021, and started a partial recap of our Tuesday Blog / Once or Twice a Fortnight shares in the form of the 222 day binge challenge - which marks today day 122 with our repost f Die Fledermaus.

The first 100 days of 2022 will complete the chanllenge, whuke introducing two fixtured for the upcoming year : 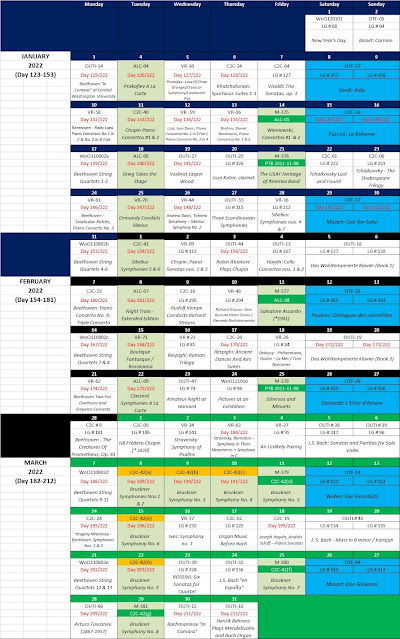 And to complete, our annual YouTube collection of odds and sods

Happy New Year ad thanks for listening!
Pierre
Posted by Pierre Cherrier at 3:00 AM No comments:

My last Tuesday Blog for 2021 follows the classic format we brought back this year.

My mom would have been 90 this year, and in some small way, this post is a wink in her direction. As an awkward teenager, my mom tried to teach me (and my brother before me) what she thought to be a basic life skill – ballroom dancing. She tried her best to get us to learn the basic steps to Latin dances, particularly the cha-cha and rumba. Her go-to vinyl record was an old Mercury disk featuring Xavier Cugat and his orchestra.

Xavier Cugat (1900-1990) was a Calatan musician and bandleader who spent his formative years in Havana, Cuba. A trained violinist and arranger, he was a leading figure in the spread of Latin music. In New York City he was the leader of the resident orchestra at the Waldorf–Astoria before and after World War II. One of his trademark gestures was to hold a chihuahua while he waved his baton with the other arm.


Today’s share features two specific Cugat albums: a “Best Of” compilation and the record that my mother used for her lessons, “Viva Cugat”. The Best Of Xavier Cugat And His Orchestra YouTube - https://youtube.com/playlist?list=PL...mtRn7Z6L6cgEH8
Internet Archive - https://archive.org/details/xavier-cugat-the-best-of-xavier-cugat-hq-music-full-album
Posted by Pierre Cherrier at 7:45 AM No comments:

Blogger’s Note: As we review our many musical shares from our musical forum activities under our ongoing “222 Day Binge Challenge”, the Friday Blog and Podcast will revisit some themes from past Tuesday Blogs. Today’s montage is part of that exercise. The Tuesday post in question was issued on December 26, 2011. The programme reuses some of the same works and the below commentary is taken almost verbatim from the original post.

Ma Vlast (transl. My Country, or My Fatherland) is a tone poem cycle by the Czech composer Bedrich Smetana (1824-1884). Though other Czech composers (Dvořák and Suk) wrote a lot of folk-inspired music from their homeland, Ma Vlast stands out as being more of a patriotic work, not unlike Sibelius' Finlandia, for instance.

The six tone poems that make-up Ma Vlast are a mix of folklore, legend and atmosphere. From the on-set, the poems were meant to be played as part of a larger group, and Smetana makes use of Leitmotivs and other such devices to sew the music together into one large fabric.

Of the lot, Vltava (The Moldau) is probably the most famous, having been recorded as a stand-alone piece by almost every major conductor. However, one cannot lose sight of the other five, as they all have their own charm and particular potency.

Czech conductor Rafael Kubelik (1914-1996) is a member of the great generation of conductors born between 1908 and 1920 which includes names like Bernstein, Karajan and Giulini. After graduating from the Prague conservatory, he gives his first performance as conductor with the Czech Philharmonic in 1937, and becomes its Principal Conductor in 1942, succeeding Vaclav Talich.

When the Communist regime takes hold in then-Czechoslovakia, he chooses exile and leaves his homeland in 1948 going first to England, then to the USA where he becomes the Music Director of the Chicago Symphony (1950–1953), then music director at Covent Garden (1955 -1958). He guest conducts regularly in Berlin and Vienna and, in 1961, begins a near-20 year tenure with the Bavarian Radio Symphony Orchestra (1961–1979).

While still in Prage in 1847, Kubelik sets up the "Prague Spring Music Festival". It is the tradition at this festival that Ma Vlast be played at the inaugural concert, and that Beethoven's Ninth be played at the closing concert.

There is no better match than that of Kubelik and Ma Vlast - the patriotic Czech work performed by the sensitive conductor, hopping all over Europe and North-America while longing for his homeland.


I think you will (still) love this music too.

Today’s blog and podcast is dedicated to Sergei Rachmaninov - not as a composer, but as a concert pianist. This is nothing new - Liszt made a fine career as a concertist as well as in composing. Rachmaninov did what he had to do to "feed his family":

Rachmaninov possessed extremely large hands, with which he could easily maneuver through the most complex chordal configurations. As a pianist, Rachmaninov ranked among the finest pianists of his time, along with Leopold Godowsky, Ignaz Friedman, Moriz Rosenthal and Josef Hofmann, and is perhaps one of the greatest pianists in the history of classical music.

The 1917 Russian Revolution meant the end of Russia as Rachmaninov had known it. With this change followed the loss of his estate, his way of life, and his livelihood. On 22 December 1917, he left St. Petersburg for Helsinki with his wife and two daughters (on an open sled!)

He spent a year giving concerts in Scandinavia while also laboring to widen his concert repertoire. Near the end of 1918, he received lucrative American contract offers. Although he declined them all, he decided the United States might offer a solution to his financial concerns.

He departed for New York on 1 November 1918. Once there, Rachmaninov quickly chose an agent, and accepted the gift of a piano from Steinway before playing 40 concerts in a four-month period. At the end of the 1919–20 season, he also signed a contract with the Victor Talking Machine Company.

From the many recordings he left us, works I retained include a few of his won, but also works by Beethoven and Chopin.

Due to his busy concert career, Rachmaninov's output as composer slowed tremendously. Between 1918 and his death in 1943, while living in the U.S. and Europe, he completed only six compositions. The main work in today’s montage is Rachmaninov as soloist on his fourth piano concerto.

This week’s Vinyl’s Revenge is one of many available couplings of Georges Bizet’s most popular suites from his stage works, notably his two suites from the incidental music he wrote for Alphonse Daudet's play L'Arlésienne and musical selections from his final opera, Carmen.

The incidental music Bizet composed for L'Arlésienne consists of 27 numbers (some only a few bars) for voice, chorus, and small orchestra, ranging from short solos to longer entr'actes. Bizet himself played the harmonium backstage at the premiere performance, which took place 1 October 1872 at the Théâtre du Vaudeville in Paris.

The play itself was not successful, closing after only 21 performances. The incidental music has survived and flourished, however. It is most often heard in the form of two suites for orchestra. Assembled by Bizet himself, L'Arlésienne Suite No. 1 uses a full symphony orchestra but without the chorus. The first performance was at a Pasdeloup concert on 10 November 1872. L'Arlésienne Suite No. 2, also written for full orchestra, was arranged and published in 1879, four years after Bizet's death, by Ernest Guiraud, using Bizet's original themes.

Ernest Guiraud, born in New Orleans, Louisiana, is also responsible for the remaining music on this Ozawa recording; Guiraud arranged twelve numbers from Bizet's opera Carmen into two orchestral Suites. Guiraud is perhaps most famous for constructing the recitatives—both beloved and criticized—that replaced the spoken dialogue in performances of Carmen for more than a century.

The original jacket notes suggest that the numbers from the Carmen suite were assembled by Mr. Ozawa himself. Internet Archive - https://archive.org/details/01-l-arlesienne-suite-no.-1-op.-23
Posted by Pierre Cherrier at 7:00 AM No comments: