Today’s Blog and Podcast is a “crossover” montage, intermingling our Friday series with an ongoing Tuesday Blog share discussed on November 2nd. As we deploy five CDs worth of Beethoven piano trios on our podcasting channel, part four of the set focuses on a pair of trios and a set of variations.

To begin today’s montage, the Piano Trio in B-flat major, Op. 11, is one of a series of early chamber works, many involving woodwind instruments because of their popularity and novelty at the time. The trio is scored for piano, clarinet (replaced here by the violin), and cello (sometimes replaced by bassoon). Beethoven dedicated this piano trio to Countess Maria Wilhelmine von Thun. The work is also sometimes known by the nickname "Gassenhauer Trio". A "Gassenhauer" usually denotes a (normally simple) tune that many people (in the streets, or Gassen) have taken up and sing or whistle for themselves. In the third movement , Beethoven provides nine variations on a theme from the then popular dramma giocoso “L'amor marinaro ossia Il corsaro” by Joseph Weigl. This particular melody, "Pria ch'io l'impegno" ("Before I go to work"), so popular it could be heard in many of Vienna's lanes.

In the same vein, the "Kakadu Variations" is the nickname given to Beethoven's set of variations for piano trio on the theme "Ich bin der Schneider Kakadu" by Wenzel Müller. The work is the last of Beethoven's piano trios to be published. The work is notable for the contrast between its solemn introduction and the lightweight variations that follow.

Beethoven  was known to recycle melodies, and circulated in many editions and arrangements for different forces. To conclude, the Septet in E-flat major, Op. 20 was one of Beethoven's most successful and popular works. The second movement of the Piano Sonata No. 20 shares a melodic theme with the Minuet of the Op. 20 Septet. In about 1803 Beethoven himself arranged the whole septet as a Trio for clarinet (again, replaced her by the violin), cello, and piano, and this version was published as his Op. 38 in 1805.

Blogger’s Note: As we review our many musical shares from our musical forum activities under our ongoing “222 Day Binge Challenge”, the Friday Blog and Podcast will revisit some themes from past Tuesday Blogs. Today’s montage is part of that exercise. The Tuesday post in question was issued on March 13, 2012. The programme reuses some of the same works and the below commentary is taken almost verbatim from the original post.

As a smart man once told me, “Give a man a watch, and he knows what time it is. Give him two watches, and he can’t be sure anymore.”

At 2 AM this coming Sunday, continental North-America (except for the province of Saskatchewan and the state of Arizona) “fall backward” to Daylight Savings Time to Standard Time; gibven our current use of it,  DST is actually in effect more calendar days than Standard Time!

The common rationale for DST during the summertime is to ensure that evenings have more daylight and mornings have less. Modern DST was first proposed in 1895 and it was first implemented during the First World War. Many countries have used it at various times since then. In general, DST is in effect in the Americas, Europe and Southern Australia, with a few African and Asian countries doing so as well.

The practice has been both praised and criticized, especially on those calendar dates far removed from the Summer solstice, when young kids wait for school buses in darkness. Although an early goal of DST was to reduce evening usage of incandescent lighting, formerly a primary use of electricity, modern heating and cooling usage patterns differ greatly, and research about how DST currently affects energy use is limited or contradictory.

In Canada, there’s  been conversations about whether to abandon the practice completely – that would likely only happen in my opinion if America chooses to do so as well.

Today’s playlist is a collection of pieces of music that talk about clocks and time. From Haydn’s Clock symphony, to Leroy Anderson's Syncopated Clock. Of course, there are titles by Lukas Foss, Wendy Carlos and Ponchielli added to the mix.

Set your watches to proper time, and enjoy sleeping in the extra hour!

Our Cover2Cover post this week is another Brilliant Classics share in our series of collections. It is a five-disk set featuring the complete Beethoven piano trios; this set contains also the shorter works for piano trio, arrangements, and the transcription of the Symphony No. 2 for piano trio, by Beethoven himself.

The following notes are from the official promotional page for this set:

The piano trio existed, in other guises, long before Ludwig van Beethoven got his hands on it. But he was the composer who would expand the genre beyond all recognition, using his relentless creativity to exploit the piano trio to its full potential.

Beethoven considered his first three piano trios worthy of his Opus one; after his first two trios in the style of Haydn he pens a third, which foretells – almost ten years in advance – the heroism of the composer’s ‘middle period’.

The 2 trios Op. 70 form a bridge to late Beethoven, and find an equivalent in the Rasumovsky String Quartets Op. 59. In the ‘Archduke’ he displayed the sheer symphonic power with which we now associate him.

The young French Trio Elegiaque has already received great critical acclaim for their recording of Messiaen and Dusapin (Diapason d’Or!). They played the Beethoven trio cycle several times in concert series, and their performances bear witness of their insight, enthusiasm and ensemble culture.

Programming Note: The single-track clip from YouTube will be deployed in five parts (one disc at a time) on our podcasting channel, including a “crossover” montage on a Friday later in November. 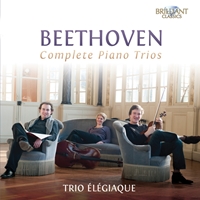 This week’s Tuesday post is another in our ongoing series Once Upon the Internet with three works taken from the Italian public domain music site LiberMusica. The common thread shared by the three works featured this week is French ballet music, emanating from two different eras.

André Ernest Modeste Grétry was a Belgian composer from the Prince-Bishopric of Liège, who worked from 1767 onwards in France and took French nationality. Staged during the French Revolution, his one-act opera La rosière républicaine lampoons of the well-established practice of entrusting religious authorities with the organization of "public holidays." We see a church transformed into a republican feast, replacing the “dismal emblems” by “the attributes of virtue and reason”, and the clergy become good republicans. The final ballet – featured here - (whose background is "too light to be seriously judged") was greatly appreciated.

The final two ballet suites are taken from two large classical ballets by Léo Delibes. Dr. Coppélius has made a life-size dancing doll. Coppélia is so lifelike that Franz, a village youth, becomes infatuated with it and sets aside his heart's true desire, Swanhilda. She shows him his folly by dressing as the doll, pretending to make it come to life and ultimately saving him from an untimely end at the hands of the inventor. Email ThisBlogThis!Share to TwitterShare to FacebookShare to Pinterest
Labels: Once Upon the Internet, Tuesday Blog
Older Posts Home
Subscribe to: Posts (Atom)