Two of a Kind

Today’s selection from the Podcast Vault takes us back to February 2012 – and our #3 Obsession – with “pairs” of works. Many of the examples are indeed limited to two, but as I pointed out in the original commentary, some of the pairs are extracted from later corpuses – such as  the first two marches for orchestra by Canadian composer Murray Adaskin - the complete set has three marches… Then, there are two of Lauro’s eight “Valses Venezolanos” for solo guitar.

As filler this week, here are all eight performed by Carlos Alberto Castro


For our tenth anniversary year, I couldn't resist programming a Once Upon the Internet montage, featuring tracks I downloaded years ago from the now defunct Japanese site Public Domain Classic.

The site (as well as the still active Italian site LiberMusica) contained lots of old mono recordings from the NBC Symphony Orchestra under Arturo Toscanini, inclosing his complete 1949-52 Beethoven cycle - from which I chose the second symphony - and some other fine gems, including this Cherubini requiem captured from a live broadcast around the same time.

(The latter serves to fulfill our usual Lenten programming).

This week’s visit to the Podcast Valut takes us back nearly two years, with a montage of Tchaikovsky’s music for piano solo, featuring his two piano sonatas from 1865 and 1878.

Postnikova has recorded the complete piano music of Tchaikovsky, Janáček, and Glinka for Erato records. She brings to every single piece a virtually ideal blend of affection, respect and intelligence, not to speak of virtuoso command. Not only does this give the textures the best possible chance to 'come off the page', she also has the instinct for inflexions which get us to the heart of Tchaikovsky's individual moods.

As our bonus track, from the same Erato collection by Viktoria Postnikova is The Potpourri on themes from Tchaikovsky's first opera The Voyevoda (TH 128), arranged by the composer himself in 1868, but published under a pseudonym.


I think you will (still) love this music too.
Posted by Pierre Cherrier at 3:00 AM No comments:

Born in Pesaro to parents who were both musicians (his father a trumpeter, his mother a singer), Rossini began to compose by the age of 12 and was educated at music school in Bologna. His first opera was performed in Venice in 1810 when he was 18 years old. In 1815 he was engaged to write operas and manage theatres in Naples. In the period 1810–1823 he wrote 34 operas for the Italian stage that were performed in Venice, Milan, Ferrara, Naples and elsewhere. Our montage features half a dozen opera overtures, spanning most of that period.

Rossini's withdrawal from opera for the last 40 years of his life has never been fully explained; contributory factors may have been ill-health, the wealth his success had brought him, and the rise of spectacular grand opera under composers such as Giacomo Meyerbeer. From the early 1830s to 1855, when he left Paris and was based in Bologna, Rossini wrote relatively little – mostly piano pieces for his own amusement. On his return to Paris in 1855 he became renowned for his musical salons on Saturdays, regularly attended by musicians and the artistic and fashionable circles of Paris, for which he wrote the entertaining pieces Péchés de vieillesse. Guests included Franz Liszt, Anton Rubinstein, Giuseppe Verdi, Meyerbeer and Joseph Joachim. He died in Paris in 1868

The latter half of the montage is occupied by ballet music written by Ottorino Respighi, principally based on some of the music Rossini wrote later in his life.

In Rome for a ballet season, Respighi brought the score of Rossini's Péchés de vieillesse to the Ballets Russes’ poobah, Serge Diaghilev. Diaghilev tasked his main choreographer, Leonide Massine, with the task of imagining a ballet to showcase this music along with disparate piano miniatures. The music could have no better advocate than Respighi, whose orchestral flair and Italianate bravura perfectly matched Rossini's lively tunes. One of the Ballets Russes’ most successful productions, La Boutique Fantasque was performed over 300 times between 1919 and 1929.

The Unknown Richard Strauss, Piano Concertos For the Left Hand


In August of 2019, I wrote a post on my Blogspot Music Blog about music written specifically for the Left Hand. At that time I wrote the following:
[...] Austrian pianist Paul Wittgenstein [had] his right arm amputated during the First World War. He devised novel techniques, including pedal and hand-movement combinations that allowed him to play chords previously regarded as impossible for a five-fingered pianist.

A musician who enjoyed the company of several luminaries of the day during his youth (Johannes Brahms, Gustav Mahler, Josef Labor, and Richard Strauss - with whom the young Paul played duets - among them), a determined Wittgenstein approached famous composers, asking them to write material for him to perform. Benjamin Britten, Paul Hindemith, Alexandre Tansman, Erich Wolfgang Korngold, Sergei Prokofiev, Karl Weigl, Franz Schmidt, Sergei Bortkiewicz, and Richard Strauss all produced pieces for him. Maurice Ravel wrote his Piano Concerto for the Left Hand, which became more famous than any of the other compositions that Wittgenstein inspired.
Today's share showcases Richard Strauss’ fascinating, somewhat atypical concertante works for piano left hand composed for Wittgenstein . At times the slow-motion harmonic scansion and rhapsodic piano writing throughout the Paregon to the Symphonia Domestica evoke Scriabin’s misty muse. By contrast the Panathenäenzug, subtitled Symphonic Etudes in the form of a passacaglia, uses a time-honored baroque form to generate opulently scored, post-Wagnerian froth.Happy Listening! 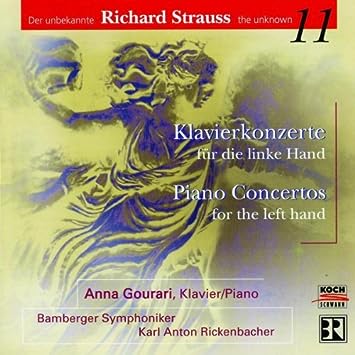 A Second or Two

For a third week un a row, our daily podcasts exploited past thematic arcs to inform our posts, and this week we relied on two similar arcs – “Terrible Twos” (from 2012) and “My Number Two Obsession” from 2013. Today’s Podcast Vault selection comes from the 2013 set featuring “second works”, or "number twos" from Bach to Buczynski. The original post discusses the individual works in good detail, so I have nothing much to add.

Featured are a couple of "second rhapsodies". Both Debussy and Gershwin had their "first rhapsodies" featured in past montages. To keep the theme going, as filler, I thought I would share Béla Bartók’s second rhapsody for violin and piano. Rhapsody No. 2 was subsequently arranged with orchestra accompaniment - composed in 1928 and orchestrated in 1929. The orchestral version was revised in 1935, and the version with piano in 1945. It is dedicated to Hungarian violinist Zoltán Székely, who later became the first violinist of the Hungarian String Quartet in 1937, two years after the founding of the ensemble.

The performance here is if the version for violin and orchestra – Isaac Stern is soloist, Leonard Bernstein conducts the New York Philharmonic.