In the spirit of fairness, I claimed that Mozart had my GOAT in the Summer of 2015... 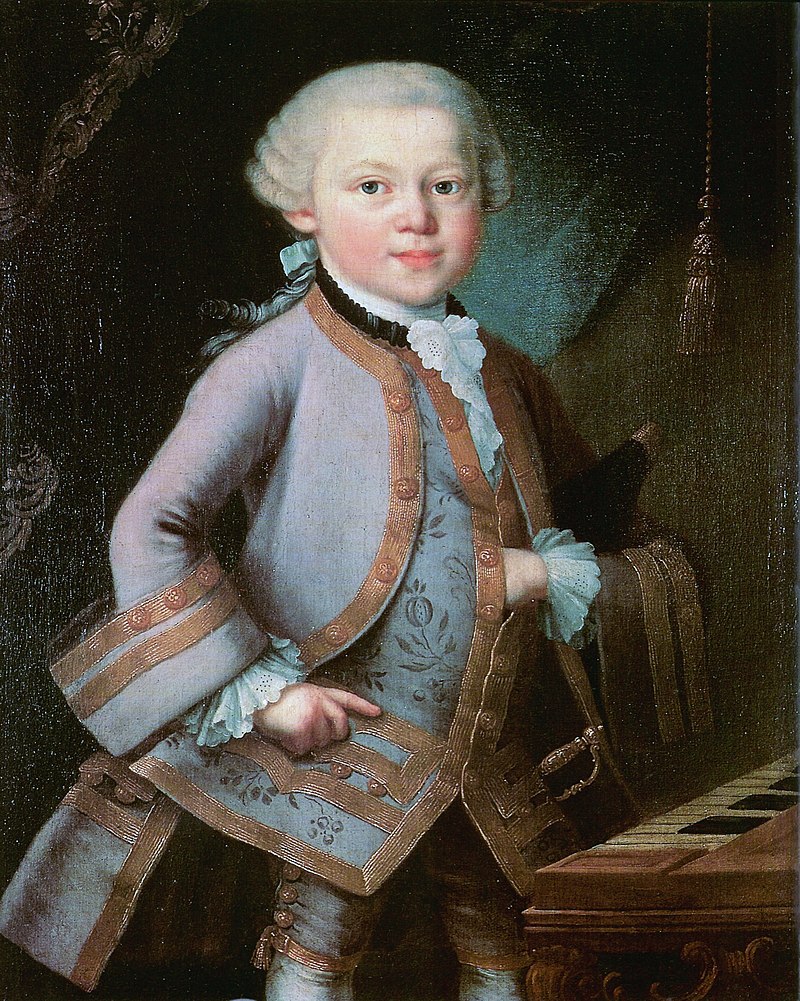 Wolfgang Amadeus Mozart (1756-1791)
Wolfgang Amadeus Mozart, baptised as Johannes Chrysostomus Wolfgangus Theophilus Mozart, was a prolific and influential composer of the Classical era. Mozart showed prodigious ability from his earliest childhood. Already competent on keyboard and violin, he composed from the age of five and performed before European royalty.

At 17, he was engaged as a court musician in Salzburg, but grew restless and travelled in search of a better position, always composing abundantly. While visiting Vienna in 1781, he was dismissed from his Salzburg position. He chose to stay in the capital, where he achieved fame but little financial security. During his final years in Vienna, he composed many of his best-known symphonies, concertos, and operas, and portions of the Requiem, which was largely unfinished at the time of his death. The circumstances of his early death have been much mythologized. He was survived by his wife Constanze and two sons.

He composed over 600 works, many acknowledged as pinnacles of symphonic, concertante, chamber, operatic, and choral music. He is among the most enduringly popular of classical composers, and his influence on subsequent Western art music is profound.

Mozart left us with a rich catalog for the solo piano as well as 27 “numbered” piano concertos and chamber works that place the piano in a predominant role. The Mozart catalog features 18 “numbered” sonatas for solo piano, as well as a handful or more of sonatas for piano four hands or two pianos. This Listener Guide offers six Mozart sonatas from the “front nine” of the series, nos. 1, 2, 5, 6, 7, and 9 composed between 1774 and 1777. (Once Upon the Internet # 37 – 19 May 2015)

This Listener Guide is a convergence of sorts – Mozart and “old keyboards”, the latter having been the subject of a listener guide in Part Ione of this project. I have retained here four of Mozart’s keyboard concertos; the first (no. 2) is performed on the harpsichord and the remaining three (nos. 5, 6 and 11) are performed on the fortepiano. (ITYWLTMT Montage #262 – 21 October 2017)

This Listener Guide is a further sampling of Mozart’s many concertos for solo instrument and orchestra, featuring three instruments – the horn, the violin and the piano. As I often due, allow me a little numerical fun as the works follow the numerical sequence 2, 3 and 4.
(ITYWLTMT Montage # 271 – 9 February 2018)

Mozart’s four Horn Concertos (along with Haydn’s and the pair by Richard Strauss) are a major part of most professional horn players' repertoire. The concertos were written for his friend Joseph Leutgeb, whom he had known since childhood. Most of us are familiar with the K. 495 finale, a "quite obvious example of the “hunt” topic. Two of the four concertos are featured in this Listener Guide, along with the Piano Concerto No. 8, also known as the “Lützow”,  a contemporary work to the Haffner Serenade (more on that shortly…) (Once Upon the Internet # 4 – 18 Sept 2012)

In the old town of Salzburg, along the left bank of the Salzach between the Franciscan Church and City Hall you wi;l find the Sigmund Haffner Gasse. It was named after Sigmund Haffner the Elder, mayor of Salzburg from 1768 to 1772. This Listener Guide is dedicated to a pair of works that were commissioned from Mozart by that prominent Salzburg family.
(ITYWLTMT Montage # 162 – 22 Jun 2014)

This Listener Guide proposes as its key work one of Mozart’s numbered symphonies that should be rightly assigned to Joseph Haydn’s brother; the so-called Symphony No. 37 adds an introduction by Mozart to a symphony in G by Michael Haydn. (ITYWLTMT Montage #270 – 30 Jan 2018)

The majority of this Listener Guide is dedicated to a special live concert staged for RIAS, dating 29 September 1959 of Mozart’s Great Mass in C, K. 427 which served as a public “full dress rehearsal” for Frerenc Fricsay’s commercial recording of the work made the next day. (ITYWLTMT Montage # 145 – 28 Feb 2014)

(Another Mozart Mass in Listener Guide # 47)

First performed in 1791 in a suburban Viennese theatre, The Magic Flute was dubbed a Singspiel - literally meaning Sing-speak – which combines spoken dialogue with arias and ensembles, and relies on spectacular visual effects to keep the crowd happy. Interestingly in his letters Mozart referred to it as an opera – he evidently had a more serious outlook on the piece. He wrote the music to the words of his friend Emanuel Schikaneder, an actor, impresario and fellow enthusiast for the freemasons – a group whose rational ideals had a powerful influence on the opera. (Once or Twice a Fortnight – 15 Dec 2015)

Email ThisBlogThis!Share to TwitterShare to FacebookShare to Pinterest
Labels: Project 366