As of  March 28, 2014, this montage will no longer be available on Pod-O-Matic. It can be heard or downloaded from the Internet Archive at the following address:

From time to time, we come to discuss conductors who are part of a “Great Generation” – those who were born around World War I, who blossomed in the late 1940’s and 1950’s, and who still today conjure a great age of symphonic music which mirrored the leaps and bounds of recording technology around World War II which eventually gave us landmark MONO recordings, stereophonic sound, and later digital technology.

The list of these great artists reads as a Who’s Who of the conductors that dominated the latter half of the 20th Century: Bernstein, Karajan, Giulini, Kubelik, and you may include in there some that were born in the 1920’s such as Boulez. As is the case with all great generations, there are those that, like a shooting star, lit brightly only to leave us at a young age. In a past post, wediscussed the short career of Guido Cantelli in that context, and today we turn to another such bright light who died too young, Ferenc Fricsay.

Fricsay was born in Budapest in 1914 and studied music under Béla Bartók, Zoltán Kodály, Ernst von Dohnányi, and Leo Weiner. With these and other faculty at the Budapest Academy of Music he studied piano, violin, clarinet, trombone, percussion, composition and conducting. Fricsay made his first appearance as a conductor at age 15, substituting for his father at the podium of the Young Musicians Orchestra of Budapest. In 1930, at the age of 16, he succeeded his father as conductor of the Young Musicians Orchestra.

Unlike Cantelll, however, Fricsay left us with a great number of recordings, thanks in large part to his work right after World War II, and this is where our post begins – not in Budapest where Fricsay was born, trained and lived underground during the war – but rather in Berlin.

Post-War Berlin is in a fragmented state – geopolitically and culturally. As go the spoils of war, so did Berlin get divided into distinct “sectors”; the Soviet victors of the Battle of Berlin immediately occupied all of Berlin. They handed the American, British and French sectors (later known as West Berlin) to the American and British Forces in July 1945: the French occupied their sector a little later. Berlin remained divided until reunification in 1990. 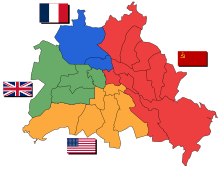 Rundfunk im amerikanischen Sektor (In English: Broadcasting in the American Sector) or simply RIAS was a radio and television station founded in 1946 in the American Sector of Berlin during the Cold War. The station's importance was magnified during the 1948 Berlin blockade, when it carried the message of Allied determination to resist Soviet intimidation.

After the Berlin blockade, RIAS evolved into a surrogate home service for East Germans, as it broadcast news, commentary, and cultural programs that were unavailable in the controlled media of the German Democratic Republic. RIAS  maintained a large research component during the Cold War, and interviewed travellers from East Germany and compiled material from the East German Communist media, and broadcast programs for specific groups in East Germany, such as youth, women, farmers, even border guards. RIAS had a huge audience in East Germany and was the most popular foreign radio service. Listening to it in Soviet-controlled East Germany was discouraged. As was the case everywhere else, the listening audience began to shrink only when West German television became widely available to viewers in East Germany.

An orchestra, known as the RIAS-Symphonie-Orchester was also established by the US forces, and still exists (for a while as the Berlin Radio Symphony Orchestra, and now as the Deutsches Symphonie-Orchester Berlin), as well as a professional chamber choir, the RIAS-Kammerchor (originally founded as the Rundfunkchor des RIAS).

Ferenc Fricsay  - who led the Budapest Opera and Philharmonic after the Second World War for a short time - was the founding conductor of the orchestra, which remained his primary appointment (1948–1954; 1959–1963) until he succumbed to stomach cancer in February 1963 at the age of 48.

Fricsay was known for his interpretations of the music of Mozart and Beethoven, as well as that of his teachers Béla Bartók and Zoltán Kodály. He conducted without a baton, according to the entry in New Grove, but "confounded the adverse critics of this technique by the extreme clarity and precision of his performances," to which it also ascribes "a dynamic spirit" and "vividness of character in familiar classics."  From the 1950s until his death, he recorded for the Deutsche Grammophon record label.

Our titles today include one such (mono) recording – a very crisp performance of Haydn’s Symphony no. 95. The majority of the montage is dedicated to a special live concert staged for RIAS, dating 29 September 1959 of Mozart’s Great Mass in C, K. 427 which served as a public “full dress rehearsal” for his commercial inscription that DGG made the next day.

In a letter to his father Leopold dated 4 January 1783, Mozart mentioned a vow he had made to write a Mass when he would bring his then fiancée Constanze as his wife to Salzburg; Constanze then sang the "Et incarnatus est" at its premiere. The magnificent work, composed 1782-17883 for an unusual vocal quartet–two sopranos, tenor, and bass– is an “unfinished” mass, missing all of the Credo following the aria "Et incarnatus est" (the orchestration of the Credo is also incomplete) and all of the Agnus Dei. The Sanctus is partially lost and requires editorial reconstruction. There is a good deal of speculation concerning why the work was left unfinished. Given the absolute necessity of a complete text for liturgical use, it is likely that Mozart spliced in movements from his earlier Masses for the premiere.

Fricsay leads an inspired and spirited performance of the Mass, leaving it “unfinished” (as the composer had left it) without speculating as to how Mozart would have turned the fragmentary work into a full liturgical setting. The only creative license here was turning over one of the soprano voices to Austrian contralto Hertha Topper.

I Think you will love this music too.