This is the first of Pierre's Twelve Days of Blogging.Recommended Reading:Three Kings in 50 minutes 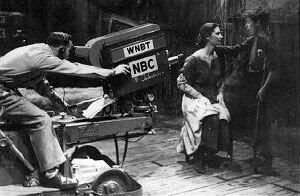 To kick off my Twelve Days of Blogging, I have chosen a very special TDMH post, which takes us back exactly 60 years to the Golden Age of Television, that has double significance:
The anthology seies is the Hallmark Hall of Fame, and the classic is Gian Garlo Menotti's made-for-TV opera, Amahl and the Night Visitors.It would be a disservice of me to even try and tell the story of the curious circumstances that have preceeded and followed this historic broadcast - the referenced article Three Kings in 50 Minutes does an excellent job of doing so, providing not only the history, but also some anecdotes about network television in the Golden Age. It is well worth your while to read this article.For those of you who aren't familiar with the piece, it is a one-act opera, sung in English, that tells a sort of Holday Tale taking place in the Holy Land around the time of Christ's birth. As the title suggests, a young cripple shepherd (Amahl) and his mother are visited by three Kings (the very Kings of the Gospel) on their way to see the Blessed Child. As in any good tale, there is a good mix of tragedy and magic, along with a miraculous and fitting ending. Saying more (if, indeed, you have not seen this opera) would spoil everything.The kinescope reel that we will watch today is from the original broadcast - it was believed to have been lost, but thankfully was found at the Museum of Television & Radio. It should also be pointed out that a cast recording with the original players was made not long after and is still available on CD - it is a recording I personally own and still enjoy to this day.The broadcast opens with a spoken introduction by Mr. Menotti (index cards in hand), followed by the entire opera. After a final word from the sponsor, the remainder of the broadcast is filled by carols sung by a boy's choir - probably the Columbus Boys Choir which Chet Alen belonged to at the time. Unfortunately, the kinescope ends abruptly (consider yourself warned).The libretto is not available openly on the Internet - however you may click here for a script that was put together by a listener.Gian Carlo MENOTTI (1911-2007)Amahl and the Night Visitors (1951)One Act Opera, libretto by G.C. MenottiOrignal 1951 Television Cast (Staging by Menotti)Amahl: Chet Allen The Mother: Rosemary Kuhlmann King Kaspar: Andrew McKinley King Melchior: David Aiken King Balthazar: Leon LishnerThe Page: Francis Monachino

Internet Archive URL - https://archive.org/details/AMAHLTHENIGHTVISTORSAs a filler selection, please enjoy more Menotti - My Christmas (1987)Nashville Symphony Chorus, Chicago Symphony Chorus, Nashville Symphony Orchestra, under Alastair WillisFinally, on behalf of myself and my family, best wishes for a great, happy and safe Christmas to you and your family!
Posted by Pierre Cherrier at 12:41 PM