Tomorrow, we will be celebrating Canada’s 150th birthday, and though I expect a great deal of overt security measures in and around Parliament Hill and Ottawa’s downtown core, our city will no doubt throw an epic Birthday party!

I thought it was fitting for me to share a podcast to celebrate Canada’s birthday and I decided to focus on one of Canada’s most famous exports. 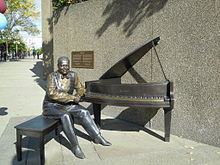 Every mooring around 6:30, my bus drives along Albert st. in Ottawa and I get to see the statue of the Canadian jazz pianist Oscar Peterson (1925-2007) on the South-West corner of Canada's National Arts Centre. The statue shows Peterson as if he had just finished playing and had turned toward his audience.

The life size statue includes a space for visitors to sit next to him. More often than not, at the time I go past the statue, some construction workers share their morning coffee sitting next to Oscar – I don’t think he’d mind!

Peterson grew up in Montreal’s Little Burgundy, a predominantly black neighbourhood where he found himself surrounded by the jazz culture that flourished in the early 20th century. His father, Daniel Peterson, an amateur trumpeter and pianist, was one of his first music teachers. As a child, Peterson studied with Hungarian-born pianist Paul de Marky, a student of István Thomán, who was himself a pupil of Franz Liszt. At the age of nine Peterson played piano with control that impressed professional musicians.

Peterson also credited his sister—a piano teacher in Montreal who also taught several other Canadian jazz musicians, most notably Oliver Jones—with being an important teacher and influence on his career. We’ll get back to Daisy a little later in my commentary.

In 1940, at fourteen years of age, Peterson won the national music competition organized by the Canadian Broadcasting Corporation. After that victory, he dropped out of school and became a professional pianist working for a weekly radio show, and playing at hotels and music halls. Called the "Maharaja of the keyboard" by Duke Ellington, Peterson released over 200 recordings through a career that spanned 6 decades, won eight Grammy Awards, and received numerous other awards and honours. He is considered one of the greatest jazz pianists, and played thousands of concerts worldwide.

One such concert took place at the Orpheum theatre in Vancouver, August 8, 1958, and featured Peterson with the most familiar formulation of his Trio, with bassist Ray Brown and guitarist Herb Ellis.
From that concert, I retained a number of tracks for today’s montage, some Jazz standards, others featuring original compositions by the members of the trio including The Music Box Suite, a piece inspired by Peterson’s sister, Daisy. The selections include Peterson’s audience banter between tracks, including his narrative for the Music Box Suite, a fitting display of his obvious admiration for his sister.

My profession has taken me to every part of the world, none of them more beautiful than where I live. As a musician, I respond to the harmony and rhythm of life, and when I’m deeply moved it leaves something singing inside me. With a country as large and as full of contrast as Canada, I had a lot of themes to choose from when I wrote the Canadiana Suite. This is my musical portrait of the Canada I love.

The second part of the montage is a complete performance of the Canadiana Suite, probably his best known composition. Commissioned by the CBC in 1963, it is a collection of eight short tableaux that moves its listeners across the Canadian landscape on a conceptual railway journey, starting in the Maritimes (Ballad to the East), sweeping through the Laurentian Mountains (Laurentide Waltz) to Montreal (Place St. Henri), Toronto, (Hogtown Blues) Manitoba (Wheatland), Saskatchewan (Blues of the Prairies) Calgary (March Past) and ending in British Columbia (Land of the Misty Giants).
The performance, recorded for Limelight Records on September 9, 1964 (nominated for a Grammy Award in 1965 for best jazz composition) features yet another incarnation of the Oscar Peterson Trio, this time replacing Ellis with drummer Ed Thigpen.