Today’s second “Mad for Mendelssohn” podcast features a trio of trios, two of them by Felix and one by his sister Fanny, who was herself an accomplished musician and composer. 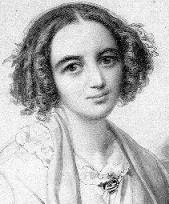 Fanny Mendelssohn is the oldest of the four Mendelssohn children and shared the early musical education and upbringing of her younger brother Felix, including tuition from Carl Friedrich Zelter who, at one point it seems from some of his letters , favoured Fanny over Felix. However, Fanny was limited by prevailing attitudes of the time toward women, attitudes apparently shared by her father, who was tolerant, rather than supportive, of her activities as a composer. Felix did however arrange with her for some of her songs to be published under his name (three in his Op. 8 collection, and three more in his Op. 9). In 1842 this resulted in an embarrassing moment when Queen Victoria, receiving Felix at Buckingham Palace, expressed her intention of singing the composer her favourite of his songs, "Italien", which Mendelssohn confessed was by Fanny.

Her Piano Trio dates from 1846 and was completed shortly before her death. It is a lovely mid romantic trio with many fresh ideas. In four movements, the opening Allegro molto vivace, begins with a flowing, restless accompaniment in the piano over which a beautiful, broad melody of yearning is sung by the strings. The gorgeous second movement, though very romantic, is introspective and reflective in mood. Fanny subtitled the third movement Lied (song in German) and indeed is a charming Song Without Words of the sort Felix made famous. The finale, Allegro moderato, has a lengthy piano introduction before the strings finally join in. The somewhat heavy, Hungarian-sounding theme has a sad but not quite the ragic aura to it. Cross rhythms and the second theme serve to lighten it.

Fanny’s trio is preceded and followed in our montage by her brother’s two trios, performed in a vintage Soviet-era recording by David Oistrakh and friends. Felix Mendelssohn's Piano Trio in D minor is one of Mendelssohn's most popular chamber works and is recognized as one of his greatest along with his Octet, Op. 20. The later Piano Trio  in C minor is dedicated the work to the violinist Louis Spohr, who played through the piece with the composer at least once. A notable feature of the finale of this work is its use of the melody of a chorale taken from the sixteenth-century Genevan psalter Vor deinen Thron tret ich hiermit, also known as Gelobet seist du, Jesu Christ, as the culminating melody. The tune is known in English as Old Hundredth from its association with the 100th Psalm and is commonly sung to the lyrics "Praise God from Whom All Blessings Flow."