Blogger’s Note: As we review our many musical shares from our musical forum activities under our ongoing “222 Day Binge Challenge”, today's quarterly podcast revisits a Tuesday post originally issued on November 6, 2012. The programme reuses some of the same works and the below commentary is taken almost verbatim from the original post. 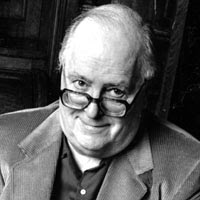 In the early 1980's, “CBC Stereo” was the FM classical music network that has since evolved into CBC Music. The CBC Stereo lineup used to feature shows originating from specific cities – not just the home office in Toronto. You had Mostly Music with Sheilagh Rogers emanating from Ottawa, Leon Cole’s Sountrack from Winnipeg, Bob Harding hosting Montreal Après-Midi and, of course, Bob Kerr and Off the Record from Vancouver.

Bob Kerr hosted Off the Record for nearly 40 years (the last 21 of which were heard coast-to-coast on the CBC Stereo network), and became known for his love of music and dislike of poorly produced albums, especially incomplete liner notes.

Born in Calgary, and educated in a boarding school in British Columbia, Kerr found his way to broadcasting after Arts studies in Edmonton and a stint in the Navy during World War II. Kerr began his broadcasting career with CFCN in Calgary in 1947. He moved to the West Coast in 1960, launching Off the Record from the CBC's studios in the Hotel Vancouver. When the one-hour Radio version was cancelled in 1976, a petition with 1070 signatures protested the decision. In its heyday, the 2-hour Stereo program (1:04 pm Monday-Friday) was prepared at Kerr’s home the preceding night. He remained a mainstay on the stereo network until his retirement in 1996.

"With his inimitable voice, distinct style and delightful character, Bob charmed listeners on a daily basis, sharing his erudite opinions and spinning songs from his formidable music collection," said at the time CBC Vice-President of Radio Jane Chalmers. The program's music came from his own library, which filled two rooms and an entire hall of his home.
Each program began with a warm "Good afternoon, friends," and ended with "A fond good afternoon"; the opening music was Antal Dorati’s recording of the Bergamasque from the Ancient Airs and Dances suite no. 2 by Respighi, and ended with Jean-François Paillard’s slow rendition of Pachelbel’s Canon.

Although his musical tastes could be eclectic at times, Kerr’s repertoire of predilection was English late Romantic and turn-of-the-century music. Moreover, every Thursday was “Organ Thursday”, sifting through recordings of Bach and the great French masters. Generally, Kerr would “feature” a major work every hour, filling the remainder of the time with his many reflections on the work, the recording he chose, showing sometimes his irascible side by poo-pooing the jacket notes or the quality of the vinyl pressing.

Our Playlist for today is, as I see it, a microcosm of what a Kerr program would have entailed, bookended by the Respighi and Pachelbel works mentioned above. I can almost certify I heard all of the chosen tracks on his show – including generous samplings of the Michael Rabin album.

Posted by Pierre Cherrier at 7:00 AM